Once you've arrived at PIT there are several forms of transportation to make the trip to the North Shore including: taxis, limousine, shuttle, and app-based rideshare services. All ground transportation services – including rental car agencies, taxi and limousine services are located on the lower level of the terminal building adjacent to baggage claim.

App-based rideshare programs such as Uber and Lyft are available and range from $31 – $80 depending on the size of the vehicle requested.

According to Pittsburgh's visitor website, Port Authority of Allegheny County is the public transit agency for the greater Pittsburgh area, providing bus, light rail, incline and paratransit service. For bus service and the "T" - Pittsburgh's light rail system - pay as you enter at the front door. This policy is in effect at all times.

You can transfer between the 28X (from the Pittsburgh International Airport) and most other Port Authority bus or "T" routes in downtown Pittsburgh. A transfer costs $1 for those with a ConnectCard and is good for three hours in any direction aboard a connecting vehicle. Request a transfer from the operator before paying your fare. Riders paying with cash will pay $2.75. Exact change is required when paying with cash as bus drivers do not carry change. Travel within Downtown and the North Shore is free 24/7 on the "T".

The Steelers, Pirates and Oxford Development are pleased to have partnered on a new parking garage between Acrisure Stadium and PNC Park. Adding over 400 new spaces to the North Shore, the Champions Garage will be located at the corner of West General Robinson St and Tony Dorsett Drive behind the Hyatt Place Hotel.

With the Champions Garage opening in September, the parking passes are valid for all 2022 regular season home Steelers games. Cost per parking spot for the 2022 season is $40 for each regular season game with any applicable service fees.

Before making your purchase request, please keep the following in mind:

· Parking passes for this lot are mobile delivery only. Your pass will be scanned upon entry to the Champions Garage.

· No Tailgating will be allowed inside the Champions Garage.

· Entry into the Champions Garage will be from West General Robinson Street and North Shore Drive for easy access from all directions.

Parking on the North Shore can be tight. Most of the spaces in parking lots around Acrisure Stadium — including the Gold, Red, and Green lots — are pre-sold, many of them for the whole season. The Gold lots right next to the stadium are mostly reserved for season-ticket holders with annual permits. Single-game ticket holders can try to buy a space in the Green or Red lots with SpotHero. It's best to do so well before game day

Tailgating is allowed in parking lots, but not garages. The lots typically open about five hours before kickoff. Get there as early as you can.

If you can't buy parking passes in advance, some of the Blue lots on the eastern side of North Shore and the lots around Rivers Casino might be able to accommodate you. But you should buy parking in advance if your heart is set on the North Shore. Your best bet may be to park in a downtown garage and walk across the river to Acrisure Stadium. It's almost as convenient as North Shore parking and much less expensive. Use the ParkPGH mobile app to find downtown parking on game-day.

RV parking is not allowed on the stadium-controlled lots. You'll find a few RV-friendly lots starting about five blocks from Acrisure Stadium. Use the ParkPGH app.

The Red lot tailgating scene is also pretty active and a little more family-centric than tailgates in the outlying lots. The Green lots host some pretty lavish tailgating vehicles.

Tailgating at the stadium lots is overseen by Alco Parking, who have a Code of Conduct on their Steelers parking page. 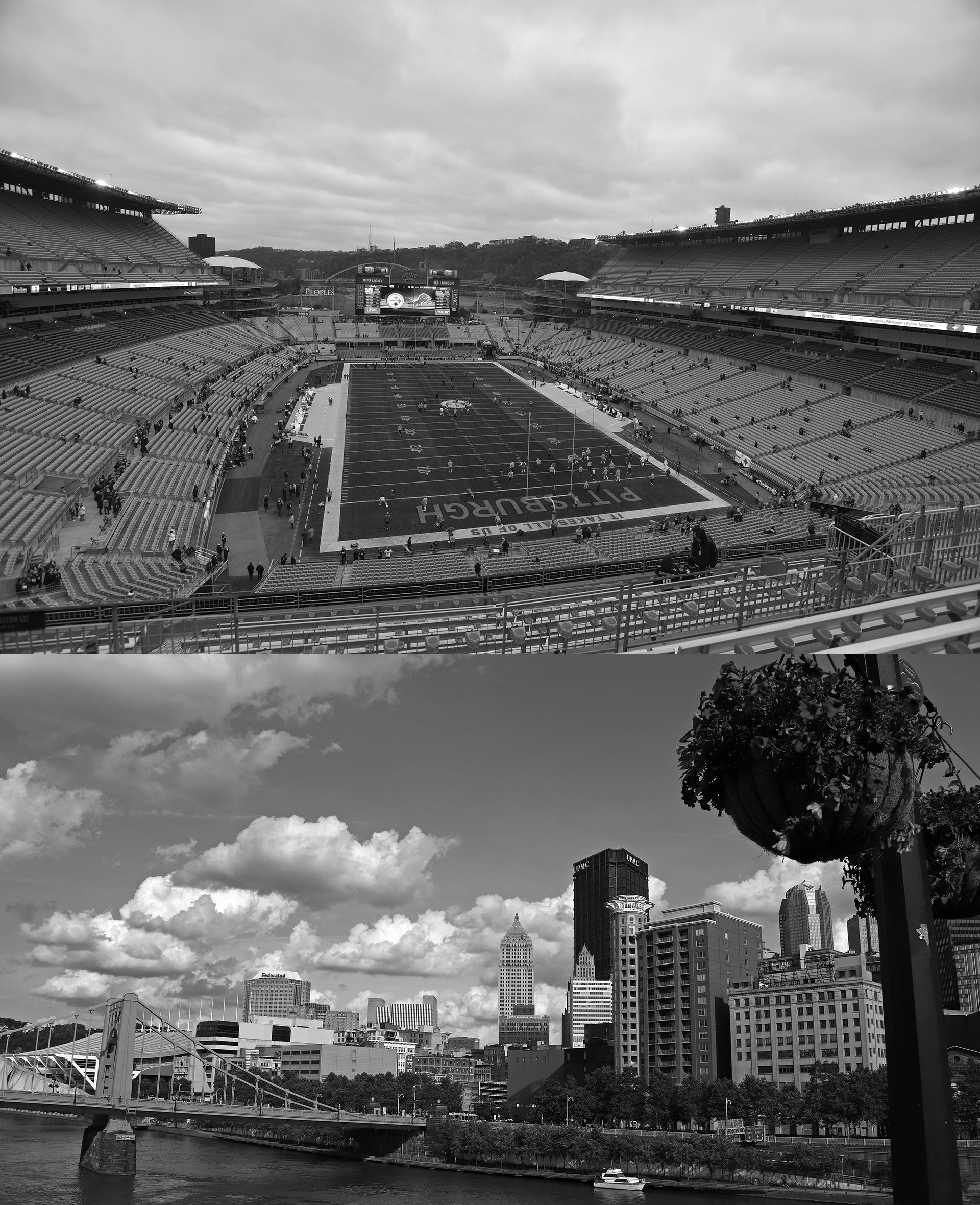 ACACIA
THE WARREN BAR
BRIDGES & BOURBON
HIDDEN HARBOR
CITY WORKS
GRAPPERIA
THE COMMONER
BAR MARCO
BAR BOTANICO
Advertising
The browser you are using is no longer supported on this site. It is highly recommended that you use the latest versions of a supported browser in order to receive an optimal viewing experience. The following browsers are supported: Chrome, Edge (v80 and later), Firefox and Safari.