The New Orleans Saints used the 91st pick in the third round of the 2018 NFL Draft to select wide receiver Tre'quan Smith from Central Florida.

As a junior, Smith caught 54 passes for 1,082 yards and 13 touchdowns. At UCF, Smith ranks second in career 100-yard receiving games (11), third in career touchdown receptions (22), tied for fifth in career receptions (168), eighth in yards per reception with 16.4 and third in career receiving yards (2,748). Smith was named to the Biletnikoff Award Preseason Watch List for the nation's best receiver as well as to the 2016-17 American All-Academic Team. Smith averaged 19.8 yards per catch, the fifth best in a season in program history

This was the Saints only pick on Day 2 after they traded up to pick 14 on Day 1 to select defensive end Marcus Davenport from Texas-San Antonio. 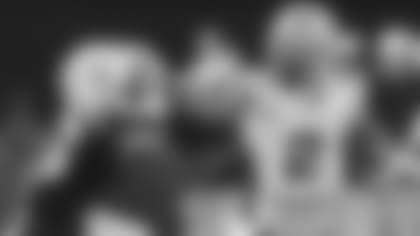 'I think you have a full, complete player'

Jackson is first player Saints have drafted from Appalachian State

Will be eligible to play immediately for Saints

Had 19 tackles for loss last season, tied for fourth most in Football Bowl Subdivision

Sun Belt Conference Defensive Player of the Year in 2021

'I feel like in life sometimes, you have to adapt and I'm willing to adapt'

Advertising
The browser you are using is no longer supported on this site. It is highly recommended that you use the latest versions of a supported browser in order to receive an optimal viewing experience. The following browsers are supported: Chrome, Edge (v80 and later), Firefox and Safari.